Some might be content with a folding table in a bookstore for (their) book release, but you know us better than that. After all, The Craft of Stone Brewing Co. is the first (ever) book about us, and we spent over a year writing it. Tomorrow (9/27/11) is the big national release day, and here's what we have planned to celebrate at the brewery...

To start, a book signing:

Greg Koch, Steve Wagner & Randy Clemens will be signing your books  and graciously posing for pictures out in the gardens starting at 5pm. We’ll even have staff on hand to take the picture for you. So that you don’t have to wait in a never-ending line for your coveted signatures, we’ll be calling people to the table in groups. If your group isn’t up yet, you can go get a beer in the meantime. Pretty good customer service, huh? Well, it gets even better when you look at the tap list…

On tap starting at 4pm: 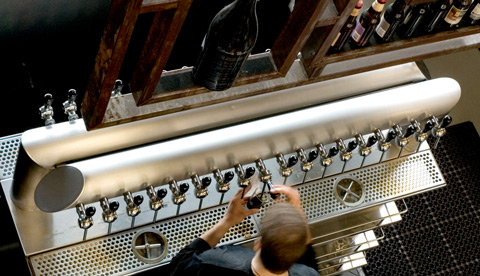 Books for sale in the store, along with rare 500ml bottles!

*Regardless of where you bought it. This offer is good to anyone visiting our store in Escondido until 9/30/12 or until we run out of bottles. (If you pre-ordered through Warwick’s or at the GABF, you are still guaranteed the right to purchase a bottle through 9/30/12.) **the BELGO versions are in very limited supply. First come, first served.

Chef Alex Carballo will be hosting a complimentary cooking demonstration of recipes from the book on the upstairs balcony from 6pm - 7:30pm, with tasting included. Not cool enough? “Dr.” Bill Sysak will be with him expounding the art of food and beer pairing and providing corresponding samples of beer.

So there you have it!

The book and bottles are on sale all day long, but the bulk of festivities start at 5pm. Hope to see you at the brewery tomorrow. If you can’t make it, there are plenty of options to buy the book online – or at the GABF!

So if I bought a book at the stone aniv party. If I don't show up today and you sell out, I'm SOL on a bottle?

No, if you pre-ordered from Warwick's you are GUARANTEED the opportunity to buy one of the bottles within one year.

Seems like a great read! Will definitely have to get this on the Christmas list. Seems like this was a great opportunity, sorry I missed it. I will be getting the book regardless. Cheers!