Well, well well. 11.11.11. Hmmm. A very special day on several levels. First, it was the Veteran’s Day of all Veteran’s Days. A perfect day to pay tribute and honor those who have served in our country’s military. And perhaps, on a less serious side, 11.11.11 was also Nigel Tufnel Day (who is Nigel Tufnel you ask?...lead guitarist for the legendary band Spinal Tap…made famous for having his Marshall amplifiers custom built with volume knobs that go to “11”…not 10.) 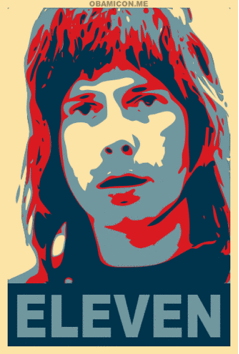 Try your hand at brewing all of the Stone Vertical Epic Ales. Homebrew recipes for each can be found at:

Wow! thank you very much for sharing :-)

I learned a lot from this post, even though I've already homebrewed a dozen batches. Thanks very much! If you want encouragement to post more well-explained homebrew recipes like this, here it is!

Can't wait to try this! The more and more I read about it, the more I want to leave work early and get it! Cheers!

How about the extract version?

Thanks for the great post. I'm a new brewer (6 batches) and an even newer all-grain brewer (2 batches). I read the recipe where it says 2.9 grams per gallon on the hops. According to my calculations, that's abou 1/2 ounce for a five gallon batch. I put .5oz of Perle and .5oz of Warrior into my favorite brewing software at 90 minutes and it calculates only around 26 IBU instead of 65. Can you tell me what I'm missing? I loved this beer and can't wait to try my hand at brewing it myself, but I'm working up to it and saving it for my 11th batch.

I've been to the brewery and I love your beer.

Thanks in advance and Happy St. Patty's Day

Thanks so much for sharing. Stone brews some of the best large beers and this one is well rounded like the others. Can't wait to try making it. Thanks Mitch and thanks for your info on the brewing network.