All About Our Yeast: Part One

Y'know... it seems like hops get a heck of a lot of attention for their delightfully flavorful contributions to our awesome beers. Rightly deserved, but there's a little unsung hero that we feel is finally due some credit: our yeast strain. 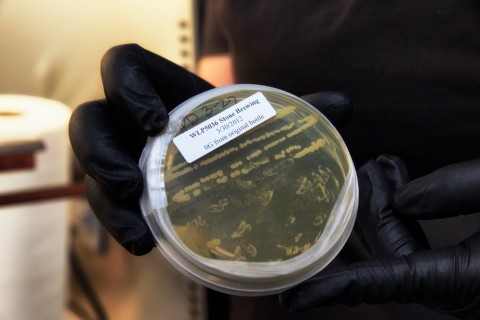 BOW BEFORE SACCHAROMYCES CEREVISIAE! Wha.. No! We were kidding! Get up!

To tell the truth, my favorite part of putting together our book—The Craft of Stone Brewing Co.: Liquid Lore, Epic Recipes, and Unabashed Arrogance—with Steve and Greg was getting the low-down on where the Stone yeast strain came from. You see, when a mommy and daddy yeast cell love each other very much... no, not really. (They don't even get to have that much fun; yeast cells reproduce asexually through a process called budding... but I digress.) Our yeast's ultimate origins were told to me by Steve, and I laughed my ass off when he told me the story. From the aforementioned book, I quoteth:

We got our yeast strain from a now defunct Canadian microbrewery. A brewery in the Northwest U.S. (that shall remain nameless) was using it when I was living up that way and I really liked its properties—I thought it would be a great fit for the beers Greg and I had talked about making. When we first moved down to San Diego, we brewed a few test batches with some yeast that Pizza Port let us have, but when it was time to get our own yeast strain going, I had my friend Jeff fly down with a batch of it from Oregon. So, there he was at the airport with this huge keg filled with liquid yeast. He was checking it as luggage, and the attendant told him it was over the weight limit. So, he wheeled the keg into a stall in the men’s bathroom, attached the fittings, and drained some of the yeast out. It wasn't a clean job though; the yeast had sprayed on the walls and around the seat and pretty much everywhere. I don’t know if you've ever seen a liquid yeast culture, but it’s not a pretty shade of brown. And, considering the fact that it was splattered over a large portion of a bathroom stall, I guarantee the poor janitor that discovered it didn't think it was yeast that made that Jackson Pollock. So, unsung hero of the custodial arts, if you’re out there reading this, please take it as our sincerest apology, and know that your work was not in vain! Our keg ended up under the weight limit and made it to San Diego safely, rolling down the baggage claim conveyor to scores of laughter and applause. Its contents have served us—not to mention countless fans—quite well ever since. We owe you a beer!

Yes, it did make it here safely. And we do use it. But where is it kept? How is it stored? How do we make more?  For these questions, I took a 25-minute drive south to see our friends at yeast mecca White Labs to find out. If you're a homebrewer, you're no stranger to the name White Labs, since they (along with Wyeast Laboratories) are responsible for a large majority of homebrewing yeast cultures out on the market. But they also perform a large number of services for breweries and wineries across the world, including many analytical tests and the ever-so-important banking of proprietary yeast strains. 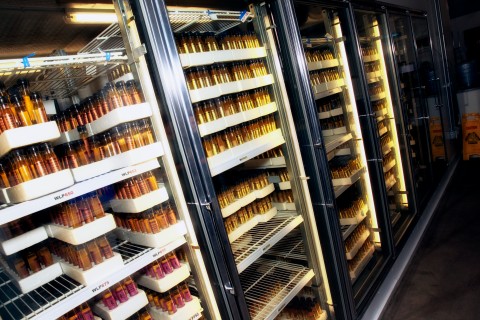 Walking into White Labs, you're greeted by an unexpected surprise: a tasting room? Too cool, but more on that later. Past the swinging doors to the left is a sophisticated laboratory, lined with all sorts of expensive looking equipment. Our guide for the day, Kara, walked us through the sparkling clean facility, explaining how they make and keep pure strains of yeast. (These folks know yeast; they wrote the book on it!)

Master cultures are kept in a malt-based medium that's about 1" thick. This sample is then stored in a crazy cold freezer that's maintained at -80°C (aka -112°F) to essentially halt any and all life processes in the yeast without damaging them. They simply become dormant. From there, a small sample is taken and spread across a growth medium in a Petri dish. Once small colonies begin to form, lab technicians select the best looking cluster and transfer that to increasingly larger dishes and fancy flasks and beakers, allowing the number of cells to multiply rapidly before transferring them to a larger propagation tank, where they are inoculated into a batch of sterile aerated wort where it multiplies more and more. (Man, yeast sure do like to get busy! Oh, wait. Right. Asexual budding... how lame!) It's then concentrated, and run through a gamut of tests to make sure that it's pure. If any other strains are found within it, or if anything appears even the slightest bit off, out it goes. Bye bye! But if it's all good, then into packages and out to brewers it goes. Hooray! (White Labs has a pretty cool infographic detailing the whole yeasty cycle on their website if you'd like to check it out in more detail.) 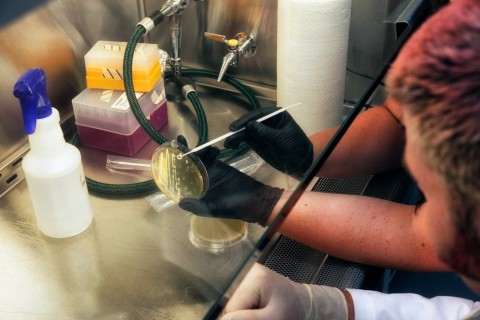 Now, before it goes out the door, or at least before I do, I figured it would be best to stop back in that tasting room. Y'know... for research. This relatively new feature at White Labs is pretty darn cool; at any given time, there can be up to 32 beers on tap and another three on cask. The coolest part? Each recipe is broken out into several different mini-batches that have each been fermented by a separate yeast strain. Everything else remains constant and all that changes is the yeast, letting you truly taste its influence on the delicious finished product. Cheers to that! 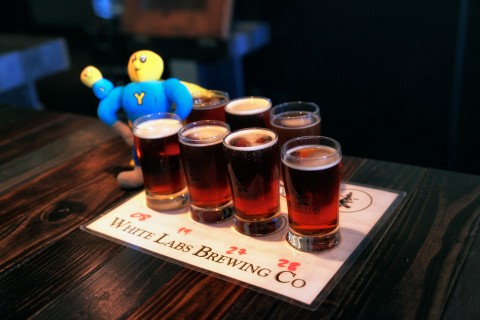 Kickin' a few samples back in the White Labs Tasting Room with Yeastman before we left. Uhhh... for blog research of course!

Keep your eyes on ye olde Stone Blog over the next few weeks for part two of our yeasty adventure, as we head into the lab here at the brewery to see what our favorite geeks lab techs do once the cultures get to us!