News flash—even the über-talented members of Team Stone who bring phenomenal craft beer to masses of fans with stellar taste are, brace yourselves for this one…only human. Like everyone else on this blue-green, spinning orb we call home, we make mistakes. Some of them turn out to be triumphs—hey, we wouldn’t have Arrogant Bastard Ale if it hadn’t been for errant mathematical calculations one fateful brew day, and we all know how that turned out! So, to an extent, we embrace our human nature, especially since that’s where discovery and new ideas often come from. Well, as some of you astute Stone fans may have noticed when picking up our new Stone Mixed 12 Pack featuring four rotating varieties of our year-round beers, there’s a goof-up we didn’t catch in time. The first edition of the Stone Mixed 12 Pack included OAKED Arrogant Bastard Ale, Stone Levitation Ale, Stone IPA and…Stone Runination IPA. 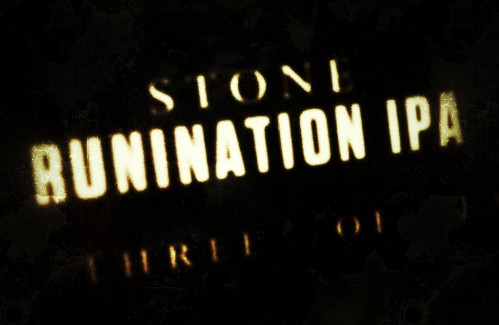 Runination? Yep, Runination. Hey, we’re not proud of it. It’s a bummer to have our Art Department  put together such a great-looking box, only to have it marred by a typo (did you know we have always produced all* of our own art in-house instead of outsourcing, and that’s what's allowed our imagery to convey our ideologies on beer and brewing so well for the past 17 years). And though it can’t be confirmed, we have the sneaky suspicion that our copy editors may have been under the influence of some Stone RUINATION IPA when going over the final proofs. But, hey, these things happen…obviously. Fortunately, we know for a fact that our discerning fans don’t buy our beer based on what’s on the outside. As rad as our packaging is, we know you all want the goodness that resides inside those bottles. 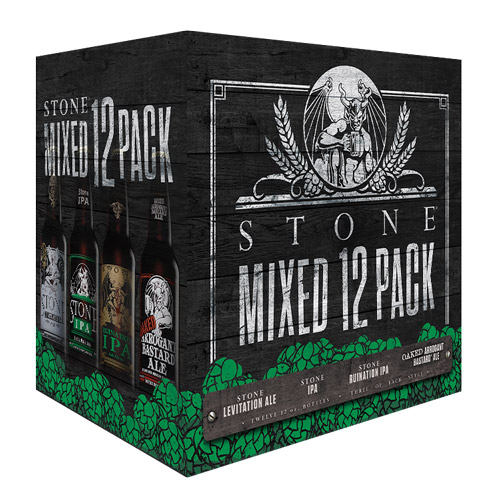 So, instead of freaking out and going all corporate, behaving like some mega company that would rather scrap 50,000 perfectly useful boxes rather than admit their fallibility, we went ahead with them. Minimizing our footprint and staying true to our focus on the environment was key in this decision. Trees were cut down to make the cardboard for those boxes and we simply aren’t capable of indifferently laying viable containers to waste. Especially when, in the grand scheme of things, Stone Runination IPA is something we can all laugh about. (We can easily envision humor catapulting #EpicFail to trending status on social media, but c’mon, if this counts as an “epic fail” worthy of taking time out of your day to post online, maybe some introspection and a reexamination of “epic failure” is in order—frankly, we think the daily operations of industrialized lowest-common-denominator food and drink companies are more worthy of the “epic fail” label!) 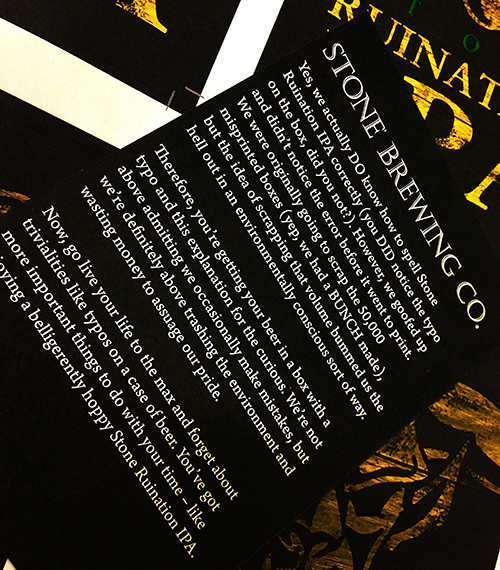 The good news is this. While the name may be misspelled on the box, there is nothing wrong with the beer inside. It’s the same Stone Ruination IPA our fans have come to love and expect. Well, now, hold on a minute, our proofreaders just read the initial draft of this blog post and caught something. Turns out, the beer in there isn’t exactly the same as the Stone Ruination IPA our fans are used to. Recently, the alcohol-by-volume was ratcheted up from the previous 7.7% to 8.2%. So, there’s a bit of difference in the brew’s octane, but that had nothing to do with the box typo (but possibly vice-versa), and you can expect that same immense wallop of piney, citrusy hop presence. Way to go, proofers. You’ve redeemed yourselves…for now. Now put down that Stone Ruination IPA and get back to work! [Insert sound of whip cracking here.] * With the exception of the two talented local graphic artists that have drawn our gargoyles!