Even in the exciting brewing industry, starting a new job is a little daunting. Like any job, all the new people and pre-established dynamics can be tough to get a grip on…and then there’s all the work that has to be done on top of that. But add in the hundreds of new people and 18 years of pre-established liquid lore and well-documented ideologies associated with Stone Brewing Co., and it makes for a few abdominal butterflies. Even coming from a smaller but plenty reputable brewing company (well, two, technically, having worked for two brands under one roof, Port Brewing Co. and The Lost Abbey), this was a formidable new career undertaking to say the least. Thank goodness for what may possibly be the best employee orientation in the world—or at least the brewing industry. 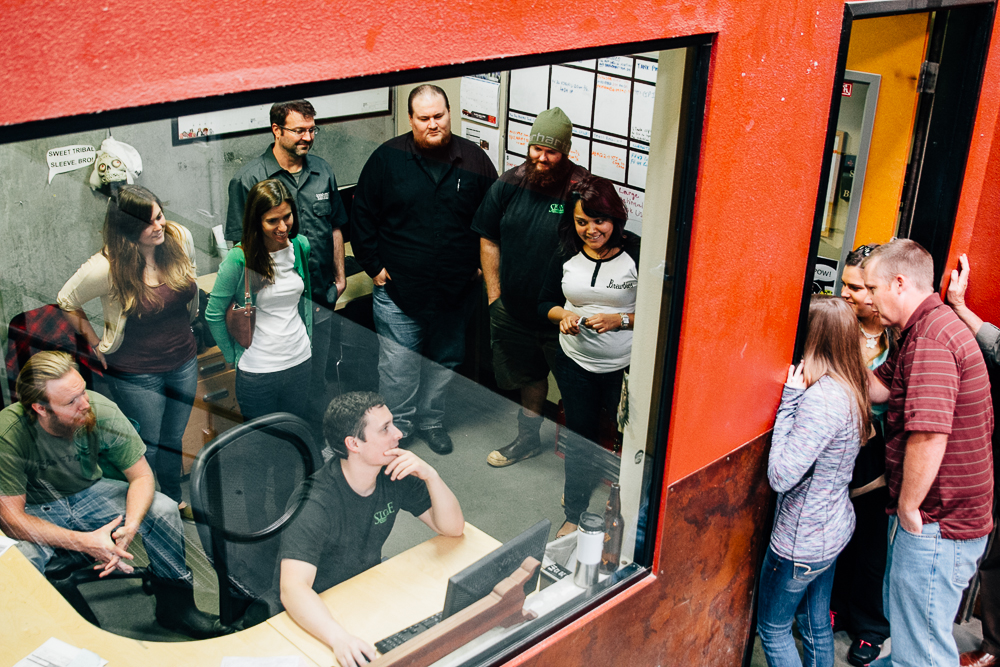 There was quite a bit to learn about the inner and outer workings of my new company and how Stone’s outspoken personality is interwoven into all of it. Suffice it to say that the morning of orientation found me excited…but mostly apprehensive. “New Hire Orientation,” in my experience, involves a nondescript roomful of equally anxious newbies busting out multiple forms of identification and filling out lots and lots of paperwork. This is necessary, of course, and these mundane tasks comprised the first part of my orientation, along with a safety presentation (it is an operating brewery, after all) and the obligatory PowerPoint slideshow, which was thankfully made bearable by the list of many Team Stone perks, beer and otherwise. Up until this point, it was a fairly normal orientation, but it wasn’t over…not by a longshot. 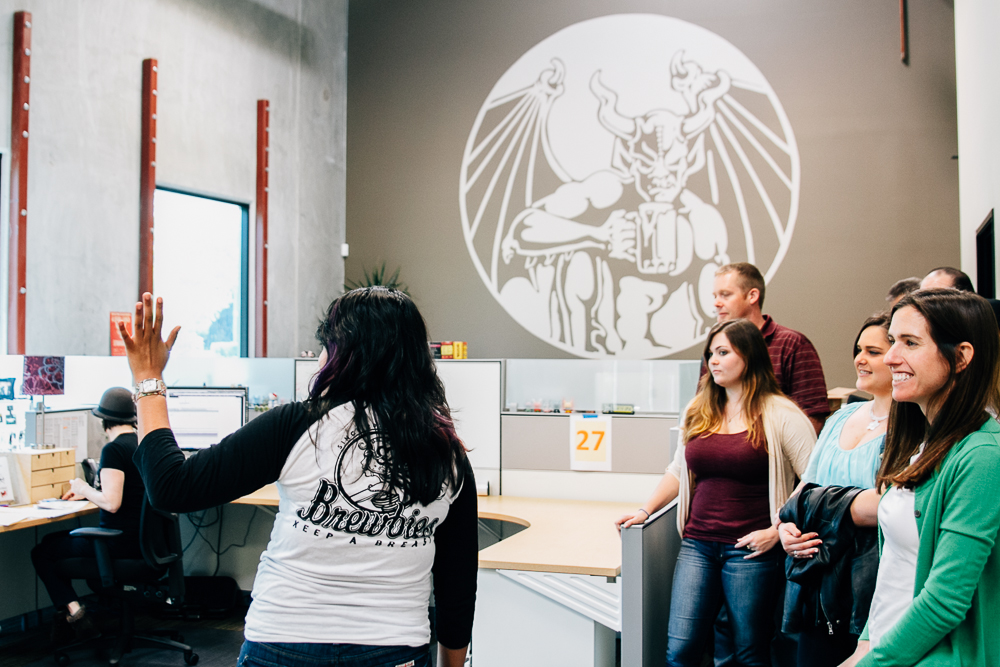 After a quick lunch (gratis, sorry, but the ever more elusive free lunch merits a mention), we were taken on a tour of Stone’s Headquarters, a recently purchased and remodeled building a half-mile away from the main brewery facility. We were literally introduced to almost everyone from Accounting to Reception to Co-Founder and President Steve Wagner. (As you may have heard, our other Co-founder and CEO, Greg Koch, has been enjoying a cross-planetary sabbatical, so I guess I’ll just have to make his acquaintance when he gets back from his fantastic voyage.)  As a Marketing Intern, HQ is my home base, but Team Stone is considered a family, so after seeing everyone there was to see at this first location, we were piled into a Scavengers Beer Tour truck (actually, it’s a refurbished Swiss military transport) and were hauled to the rest of the facilities that make up Stone’s North County San Diego campus so we could meet our more distant new relatives. That’s when this “new hire orientation” became something way beyond HR forms and slide shows. 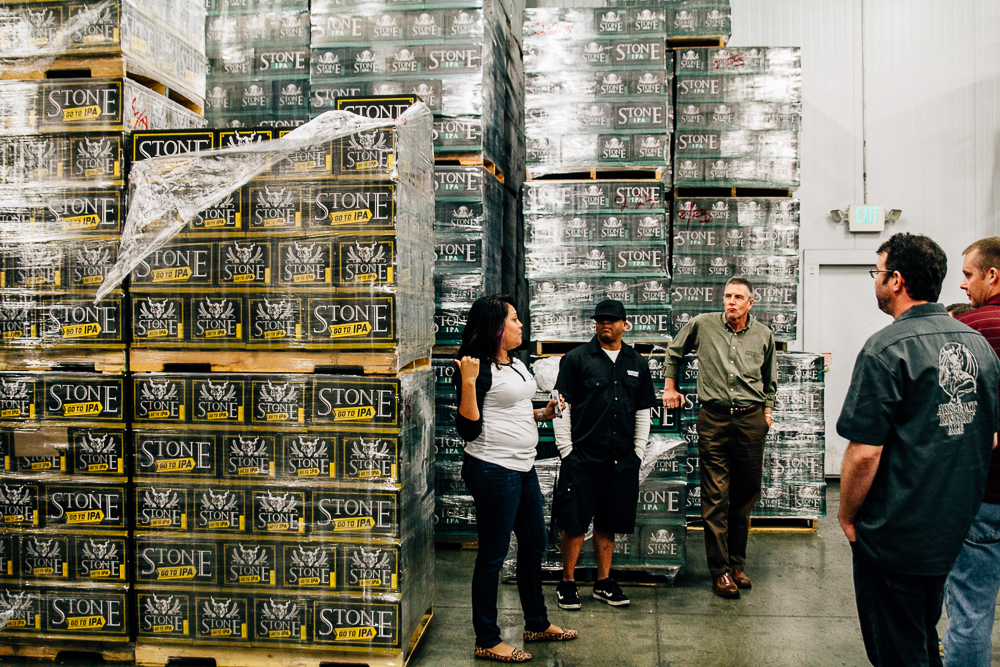 Our guide, Nickie Peña (who was filling in on tour duties…she actually sits right next to me and helps handle our public relations efforts), shuffled the herd of recruits off to our Escondido Distribution Center. We got to see all of the beers Stone distributes and the people that make it go smoothly along with the monstrous cold box where it’s all kept. (Seriously, it’s huge…I think I saw a Yeti, or at least a case of Great Divide Chocolate Oak-Aged Yeti). Merchandise, which has since moved to HQ, was also in the house and we were able to see how they keep Stone’s clothing and other fashionable miscellany moving in the direction of our fan base. From there, it was a short trip to the brewery facility, which also houses Stone Brewing World Bistro & Gardens – Escondido. We had an extensive tour of the brewery, where we took in the colossal sight of double 120-barrel brewhouses and met just about everyone responsible for making the bold, aggressive beers that inspired most of us rookies to join Team Stone in the first place. 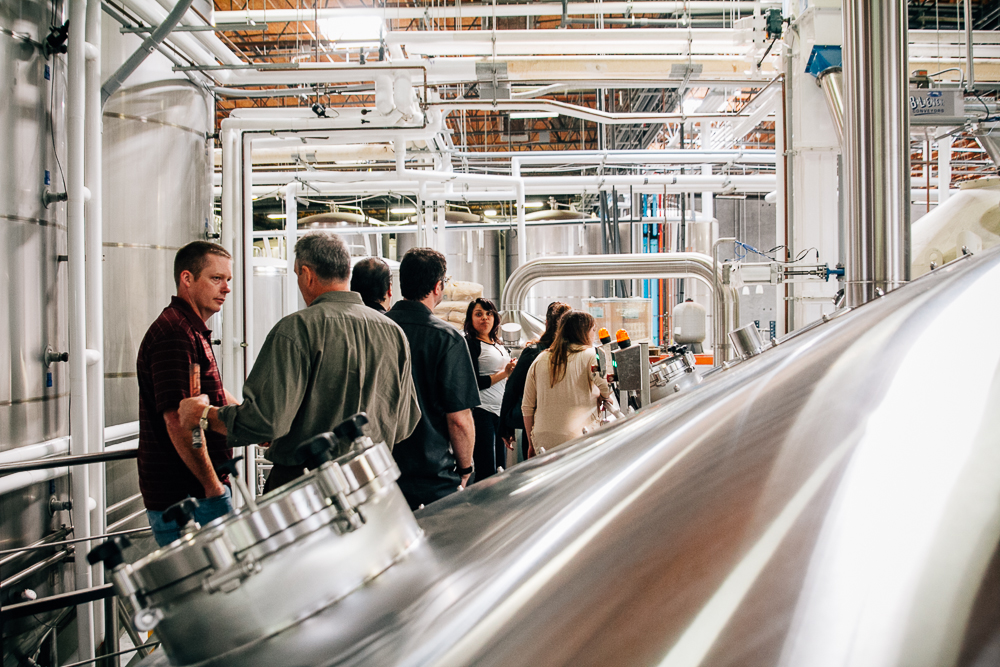 Next up was Stone Packaging Hall, a gargantuan facility built directly south of the brewery less than a year ago. Inside, we learned about all of the quality control work and testing Stone beers undergo in order to prove suitable for national distribution. First stop inside the massive hall was the bottling line, which churns out an impressive 650 12-ounce bottles and 350 22-ounce bottles per minute. The breakneck pace set by the bottling line even carries over to the kegging line, which busts out 145 kegs an hour with only two filling stations! As a local it’s hard to imagine the scope of a company that distributes nationally with only one location when it’s in your home town. But believe me, if the brewhouse didn’t do it, that packaging facility really put into perspective just how much Stone is doing on a daily basis. 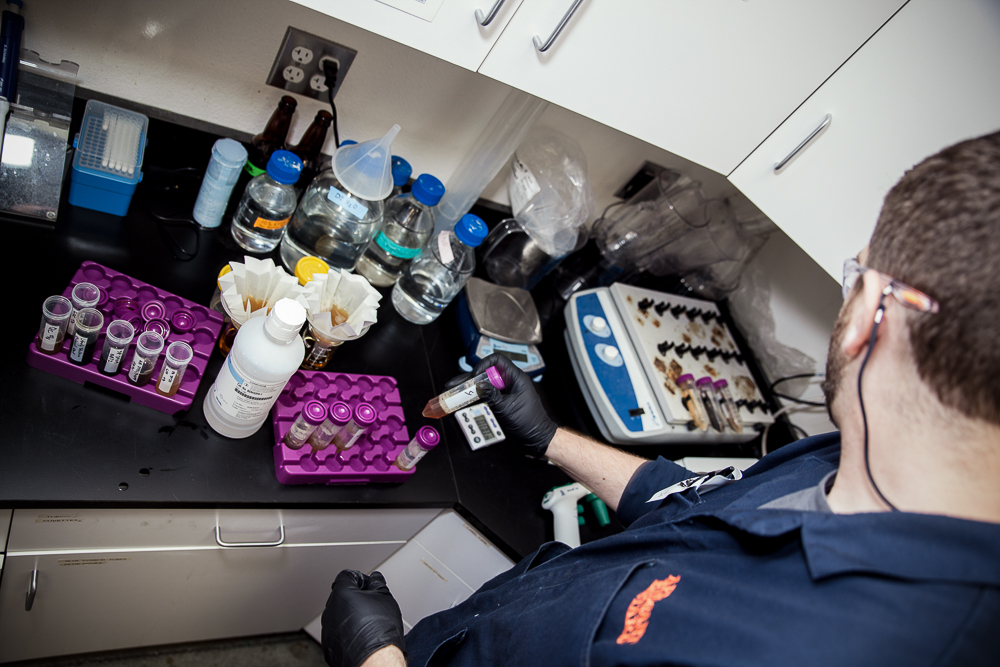 With our minds sufficiently blown, Nickie took us over to the Quality Assurance Lab to meet much of the inspiration behind the Stone Stochasticity Project and the true final test for the beer. We learned about the multiple tests new beers need to go through to ensure a consistent product and just how nitrogen factors into the testing process (if you don’t know then brush up on your knowledge). The testing our beers endure could easily merit its own blog post, with all the machines and beakers and buttons, but we’ll save that for another time. With the end of the lab explanation, our New Hire Orientation had finally come to an end and we all filtered off, only slightly dazed, to our respective offices. 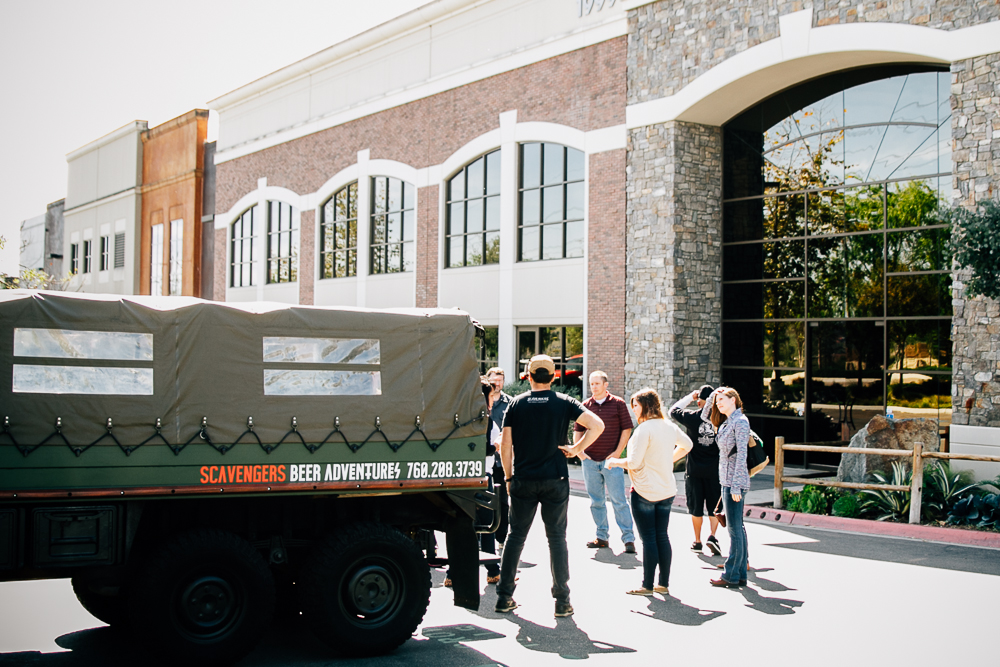 I knew that working for Stone would be different, but I certainly didn’t expect to be so full immersed in every aspect of the company. This all-out tour wasn’t just to pull employees in and keep them star-struck at the notion of working at Stone. It wasn’t just an “Oh hey, here’s all the people you’ll be sitting in a room with for eight hours a day, now get going,” it was a “Here’s the people who will help you” orientation; one I was thankful for considering I’ve since been in communication with all of them in one way or another. They want you to know everyone so that when you talk to them (and you will—it’s a seriously inter-laced bunch of craft beer-loving go-getters over here), there’s more familiarity than a plastic nameplate or faceless email address can provide. This is a first among the companies I’ve worked for. And the perks don’t end there. They pay for your first level Cicerone-certification testing, partially reimburse employees for educational beer events, award long-term members of Team Stone with a trip to any national beer festival on their five-year anniversaries and a European festival at the ten year mark. And that doesn’t even include the $2 daily lunches made with Stone Farms produce (which are free on Mondays). All of that is indeed impressive, but the best perk by far has to be the passionate, driven and authentically engaged people I get to work with. As I once saw on a tee-shirt: “Craft beer people are good people.”