Women and Craft Beer, or The Sisterhood of the Traveling Pints!

I’ve participated in well over a dozen of our previous Beer U’s, so I can say with authority that this was one of the best ones yet. Beer U: Women Only rocked! Laura Ulrich and Jessica Gilman, two of our brewers here at Stone, led the class with me and we all had a blast. And no, we didn’t sit around gabbing about shoes and manicures the whole time. As a matter of fact, there was no mention of shopping, clothes, hormonal issues, or the shortcomings of our husbands or boyfriends* the entire evening. We talked about beer. A lot! (*I believe the salient point here is that our husbands and boyfriends don’t have any shortcomings. Women who like craft beer obviously have an abundance of good taste and sound judgment, and couldn’t possibly choose partners who were anything short of stellar.) 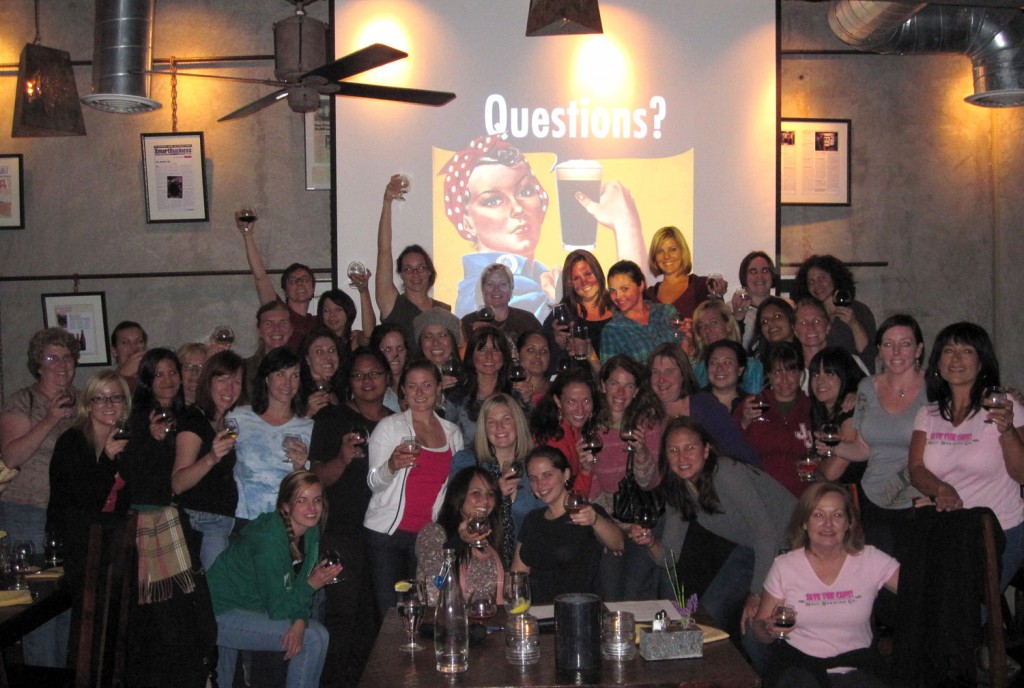 Class photo! A group of passionate, intelligent, and inspiring women.

The diversity of the attendees impressed me—there was a significant range of ages, careers, and beer knowledge represented. Several women were recent converts to the craft beer scene while others had been brewing their own for years. I asked for a show of hands at the beginning and counted eight homebrewers out of a group of 44 women! The energy in the room was lively from the beginning—and only got more “lively” as more beers were sampled. All the beers we tasted that night were from breweries that employ prominent female brewers, and in a few cases, the brewmaster and/or owner is a woman. Surprised? Don’t be. While women are definitely still a minority in the craft brewing industry, there are a lot more of us around than you might think. During the Beer U we enjoyed some exceptionally tasty beers, like Moylan’s Hopsickle, Dogfish Head Palo Santo Marron, Traquair House Jacobite, and the ever-popular Stone Smoked Porter with Vanilla Beans, Laura’s tasty signature creation. After taking informal polls, I was happily validated—women’s tastes definitely range beyond the mild (wimpy), less hoppy (boring), and pale (where’s my malt?) flavors we’re taught that we should like. Many preferred Hopsickle’s huge hoppy punch to the sweeter, malty, and mildly spicy Jacobite, blowing stereotypes out of the water. The beer was absolutely awesome, but the real highlight of the event was the sense of camaraderie we all enjoyed, and it only increased throughout the evening (hope it wasn’t just the beer!). And by the time it was over, many of the women were totally pumped up and inspired to go home and start brewing. There was even talk of beginning an all-female homebrewing club (count me in!!). We owe a big round of gratitude to all who made this happen, and especially to the women who attended. Thanks so much, ladies, for making our inaugural* women’s only event such a huge success! View photos here. 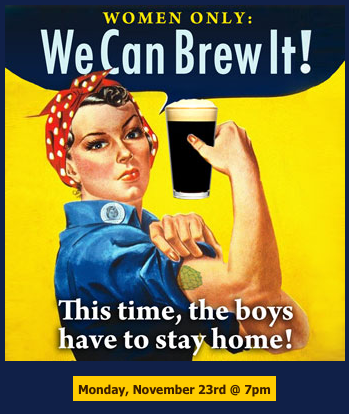 *In case you didn’t catch the significance of that word there—we’re doing this again. We know that a lot of women didn’t get the chance to go, so we’re doing the same thing this month, too.  Monday, November 23rd will be the occasion of our next women’s only event: the same class, but with a different name. Get the scoop on “We Can Brew It” here.

Kathyrn YOU ROCK! Can't wait for the next class!!

This is great, wouldn't mind attending the next meeting! is there a mailing list to join? thanks!