Sure, Stone Smoked Porter is delicious by itself. No question. But it’s also pretty damn tasty with some artisanal vanilla bean ice cream in it. Hordes of Bistro-goers agree that our Real Beer Float made with Stone Smoked Porter and Niederfranks Vanilla Bean Ice Cream is out of this world. That’s exactly how Stone Brewer Laura Ulrich got the idea for Stone Smoked Porter w/ Vanilla Beans. Around the time our Bistro first opened, Laura tried a Real Beer Float and had an epiphany—you know, the old light goes on above the head moment. “I don’t really like ice cream,” said Laura, “but I tried it and it was like nothing I’d ever had, and I said 'I bet vanilla beans would be amazing in a cask of Smoked Porter.'” Laura presented her brilliant idea to our Head Brewer, Mitch Steele, and he agreed to try it. It was difficult to achieve the right beans-to-beer ratio at first, but our brew crew has nearly perfected it. “At first the vanilla beans were pretty potent,” said Laura, “so we cut back. We’ve cut back ever since.” 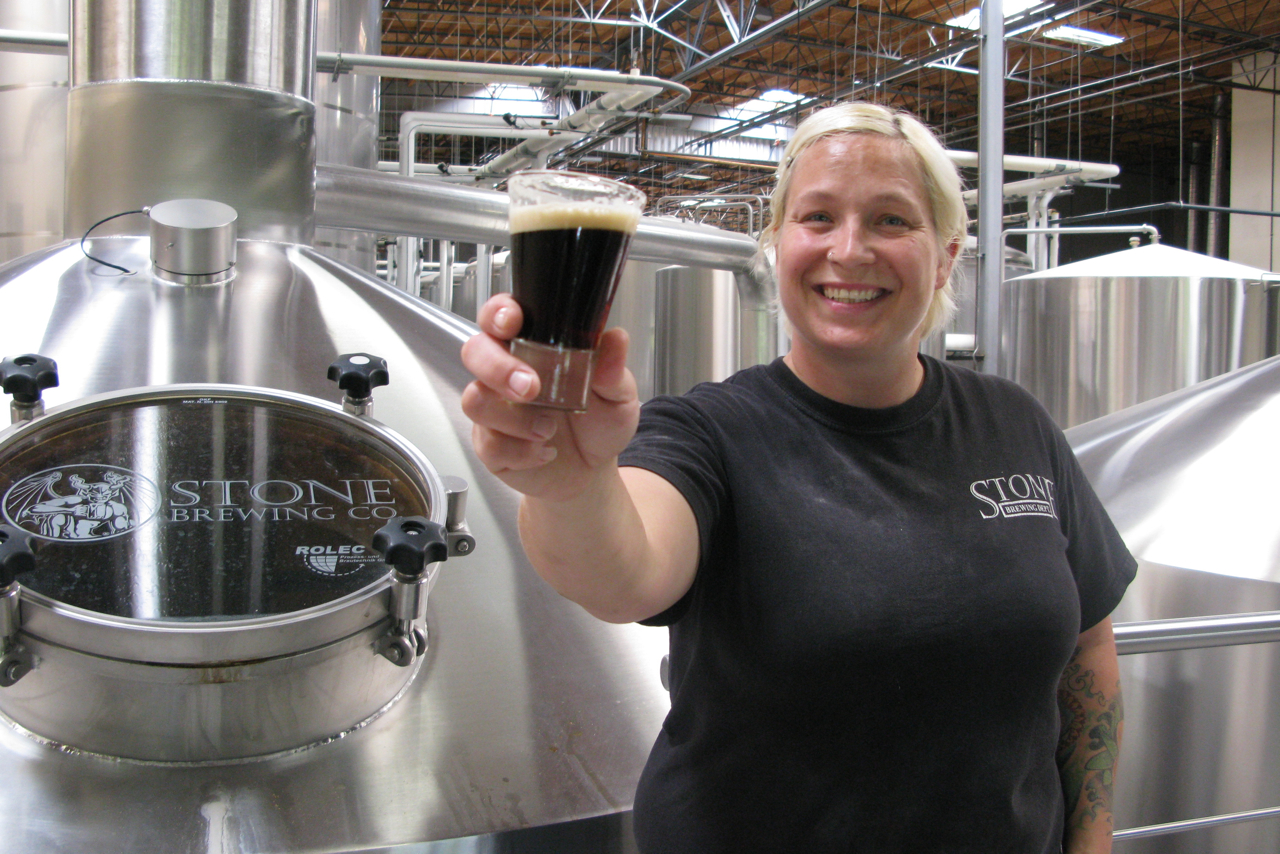 Laura used to get the vanilla beans for the brew from our Bistro kitchen. She would show up on the Bistro’s back porch like a poor stray brewer and beg for a few vanilla beans. Our kind kitchen crew obliged her for a while, but as the beer became more popular they finally told Laura to get her own vanilla beans. So she lined up a distributor, and the rest is history.

Thinking of adding vanilla beans to your homebrew? It’s super easy. Think of it like brewing a tea with vanilla beans and tossing it in your brew. Here’s how we do it: -    Slice the beans down the side w/out slicing the whole bean in half -    Open the beans and scrape out the goo -    Cut up the leftover bean shells -    Boil the goo and diced shells in water -    Let it cool to the proper temperature and add it to your brew!

So why did Laura want to add vanilla beans to our Smoked Porter? Why fix it if it ain’t broke? “I think it’s just a little more rich," said Laura. "The C02 with the vanilla beans just has that old school flavor to it—that flavor that you remember as a kid growing up and having a root beer float.” 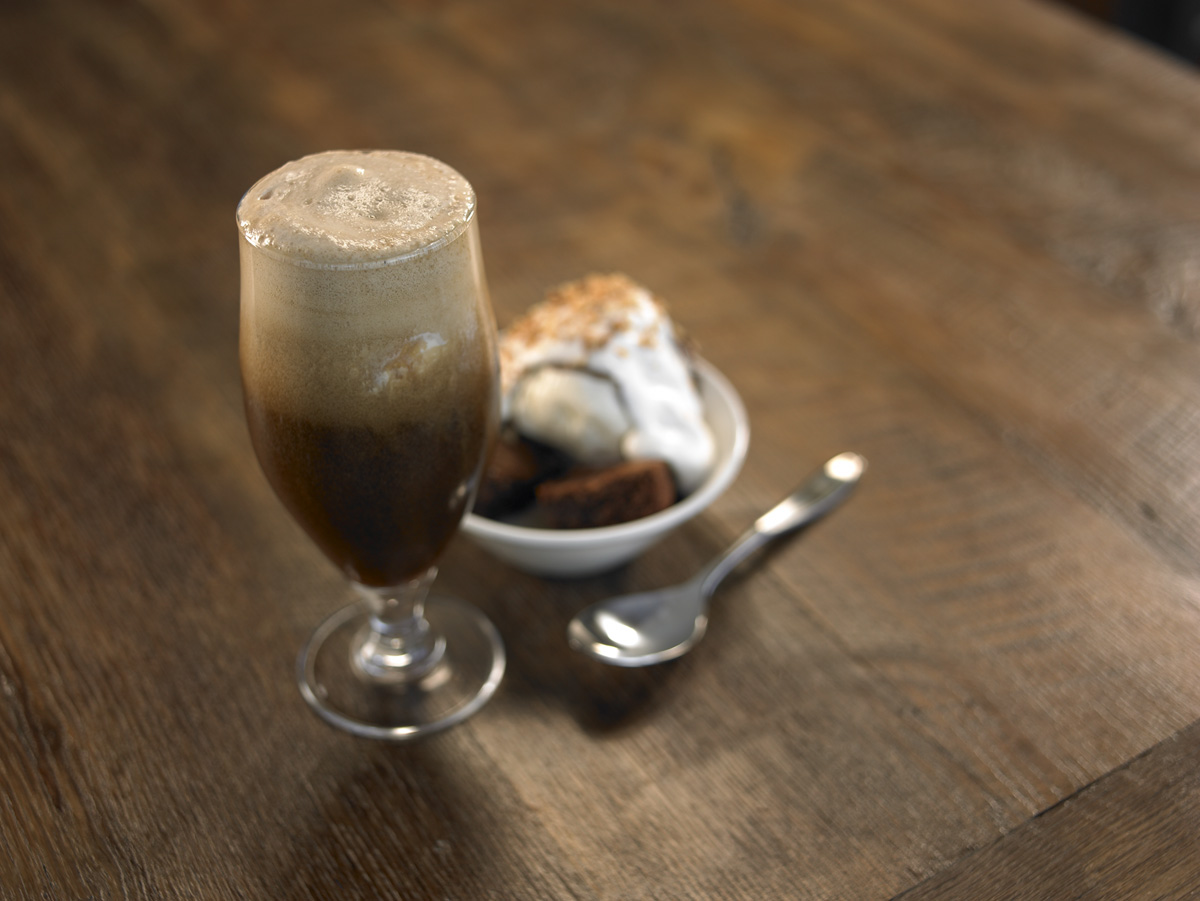 Whatever your reason for enjoying Stone Smoked Porter w/ Vanilla Beans, be it nostalgia for a past era of roller-skating waitresses and root beer floats or plain old gustatory indulgence, you won’t be disappointed. Stone Smoked Porter w/ Vanilla Beans is only available on special occasions in the Bistro and in the Stone Company Store for growler fills. Check out our growler fill schedule to see when it will be available again, and follow @StoneStore on Twitter for advanced notices on growler fills and Twitter-only specials.

I had a question about when and how much vanilla bean to your home brew. Do you add it the the beginning of the brew kettle, do you add it when your are pitching yeast? or as you would like dry hopping? and if Im an all grain brewer and Im doing 5-7gallon batches how many am I using?

Thanks for the expert help

Huh, I had no idea. That's funny though. I didn't think Stone Smoekd Porter w/ Vanilla beans was rich enough. So I put ice cream in it. But you knew that :D http://twitter.com/mikedashg/status/2884398654

Brian,
We add the vanilla beans during secondary fermentation (like a dry-hop). It took us a lot of trial and error before we got the right amount dialed in, and you might have to do the same (and it's also up to your personal preference). Good luck!

How is the Smoked Porter w/Vanilla Bean looking? I will be in around 6:45-7 tomorrow and hoping to get a fill. Do I have a chance? Probably not...but I'm hoping

With all the awesome dank, super strong Stone beers to choose from, hands down, Stone Smoked Porter with Vanilla Bean on Cask is what I imagine is poured in heaven.

This is, hands down, just a REAL GOOD beer... that simple.

I've used vanilla beans in a few homebrew batches. I find that for a ~5 gallon batch, 2 beans prepared in this manner is just right.