Thanks to passionate craft beer lovers everywhere, I Am A Craft Brewer took on more of a life online than it did at the CBC. To borrow a trite social media buzzword, it went “viral.” Within four hours of being posted on Vimeo it was viewed 1,500 times, and it sailed past 20,000 views just five days later. The video is currently hovering around a respectable 33,700 views. While the video stands alone as a testament to the camaraderie and integrity of the craft brewing industry, it was actually shown as the introduction to Greg’s keynote speech at the 2009 Craft Brewers Conference in Boston, titled “Be Remarkable: Collaboration Ethics Camaraderie Passion.” Famed beer writer Harry Schuhmacher said “It was the best speech I have ever seen,” and while it isn’t perfect, Greg’s inspirational keynote successfully illuminates the many strengths of the craft brewing industry and demonstrates that “if we don’t screw it up,” craft brewing stands poised to thrive for many years to come. 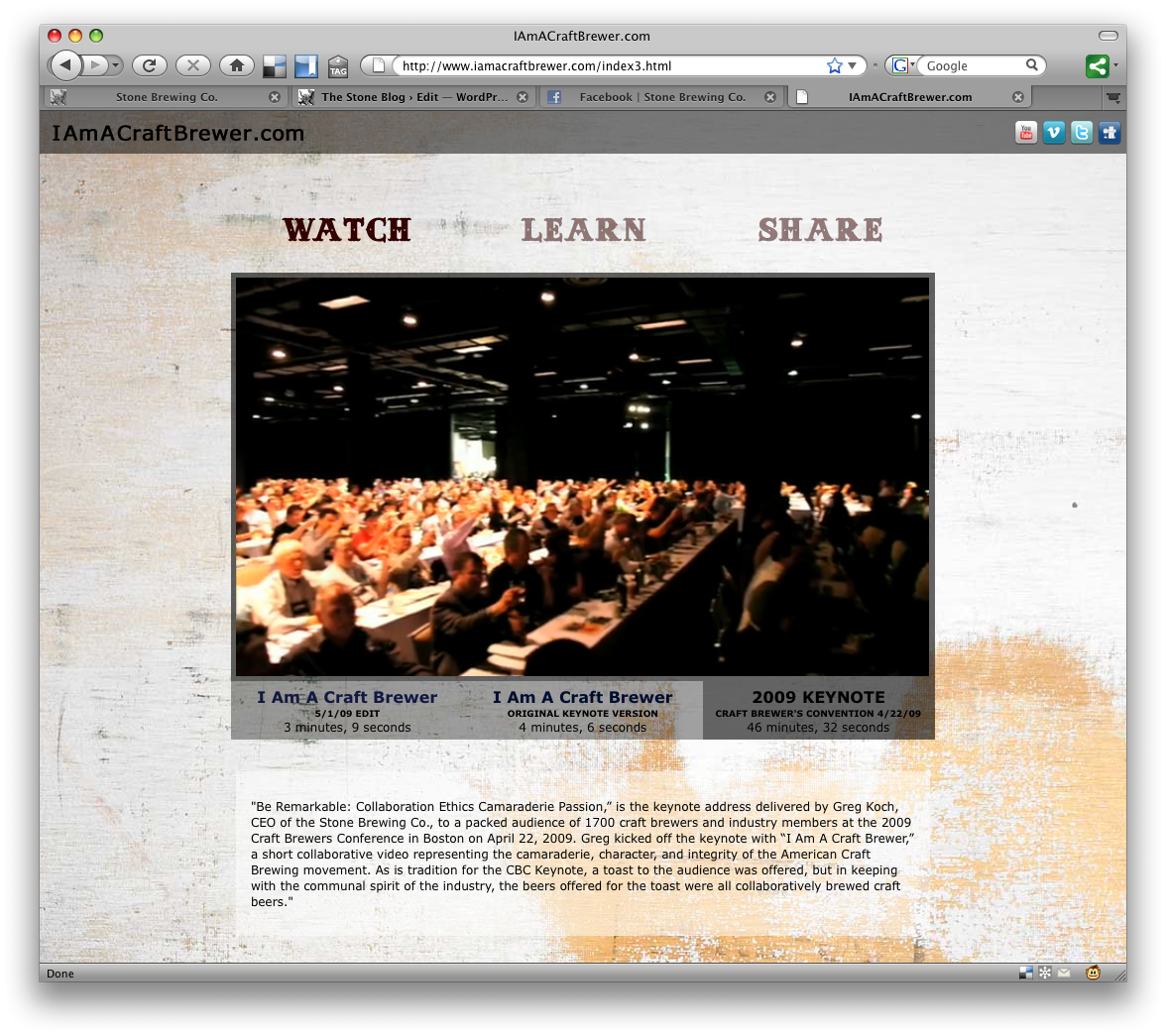 Click above to check out Greg's Keynote Address at IAmACraftBrewer.com

You can see Greg’s keynote speech, complete with an impromptu musical performance with craft beer compatriots (perhaps they should stick to beer), at IAmACraftBrewer.com. Pour yourself a tall glass and settle into a comfy chair because Greg had a lot on his mind (the speech clocks in at 46 minutes). You can also find two different versions of I Am A Craft Brewer on IAmACraftBrewer.com, as well as a bevy of quotes from bloggers and media types raving about the video and Greg’s keynote, and a short guide on how to share the video with as many people as possible to keep the movement rolling. Remember, we’re all craft beer crusaders, and it’s our job to spread the word about the spirit and integrity of the industry. Onward craft beer enthusiasts! -Matt Steele
Category:
Miscellany

The Google insight graph shows the growth in online popularity of the word "craft" within all beer related searches going back to 2004. It is very reminiscent to Greg's graph in his speech and is proof craft beer is definitely on the rise - seeing as online searches mirror real world interest. I'd reccomend zooming into the past 90 days and you'll see a spike around the time of Beer Wars, CBC and another during Craft Beer Week.

Unfortunately it seems to be hitting a valley this week, but its coming one week off the highest peak it's ever experienced.

Hi Greg,
Just a note to say that I am proud of you. You have so much love and conviction for your craft. Some time I would enjoy a trip to the Brewery. But for now I think it is time for a stone porter.
See Ya,
Greg

I just read this post on Seth Godin's blog and the first thing I immediately thought of after reading it was the IAACB video and Greg's keynote speech.

Cheers to Stone, Greg, and the entire craft brewing industry. I think these are great times we are headed into.

Some reason that link didn't work