Each year we up the number of beers we brew, and each year it seems like we can’t do any more than we already have. Yet, each year we prove ourselves wrong! In 2014, we shattered our previous record of 74 brews with an epic 120 beers. From the tried-and-true, to the boundary-pushing, it was a big year in our brewhouse. But it didn’t end with a jam-packed brew schedule. Between all these releases we planned five festivals and countless fundraisers to reinvest some love into to the community. So reminisce with us about a year that brought us amazing craft beer, thrilling times and monumental developments. 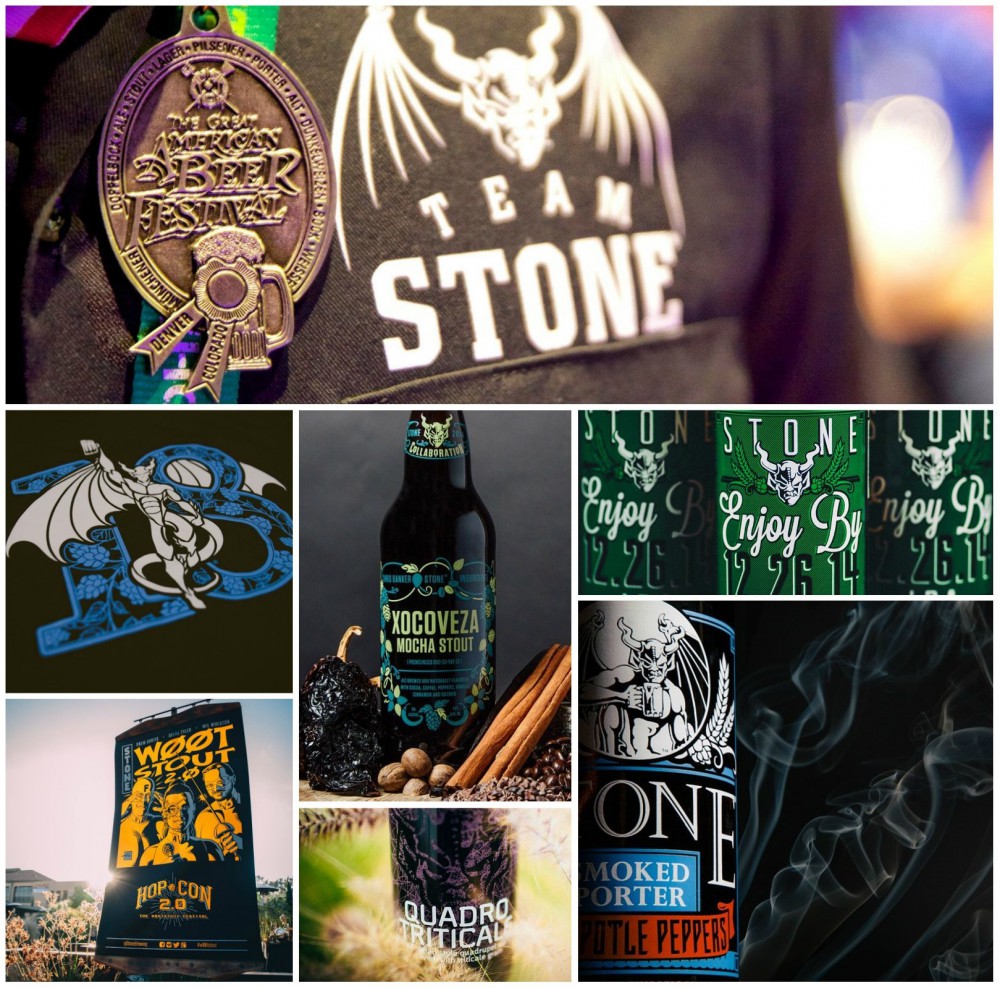 In addition to our year-round beers, we squeezed in some new yearly offerings. Stone Go To IPA, Stone Saison and Stone Coffee Milk Stout made their debut in six-packs (possible trend?) to satisfy the multi-faceted palates of our fans. Although some of these styles might be seen as a divergence from our regularly scheduled hop infatuation (which is still going strong), it was a fun opportunity to flex our brewing muscles and bring a farmhouse-style ale and java-laced stout to other parts of the country. This trend also led us to craft new variations on the surprisingly pairable Stone Smoked Porter. Stone Smoked Porter w/Vanilla Bean begat Stone Smoked Porter w/Chipotle Peppers and Stone Smoked Porter w/Chocolate & Orange Peel followed. These combinations, pulled directly from the Team Stone think tank, brought variety to our yearly beers. But, as always, we stayed true to our roots, or bines in this case, and Stone 18th Anniversary IPA reflects that. With El Dorado hops, English Brown Coffee and Chocolate Wheat malts, this IPA showed off 18 years of experience. Stone Core Beers 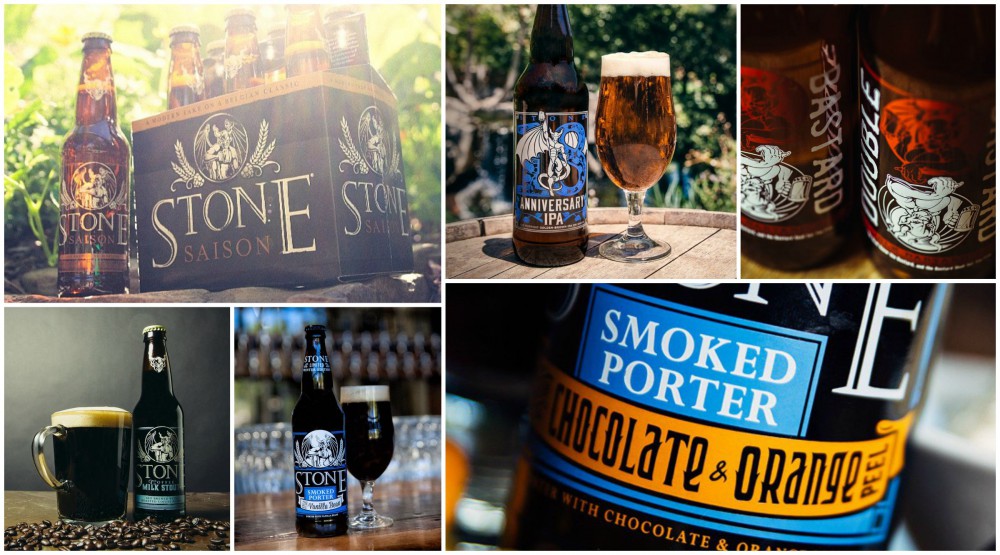 Our collaboration went beyond the community in 2014. We managed to pull together nine of our friends to create four new collaboration beers (and an IPA, or two). From rock ‘n’ rollers to comediennes, this was an eclectic group of people that managed to turn out some spectacular brews. First, we banded together with rocker and publican Keri Kelli and Kyle Hollingsworth, keyboardist for the String Cheese Incident, for Kyle Hollingsworth/Keri Kelli/Stone Collective Distortion IPA. An IPA with elderberries, coriander, its own exclusive song download and a beer tour, it was probably our most inclusive collaboration! From there, Beachwood Brewing and Heretic Brewing Co.helped us create the highly experimental Beachwood/Heretic/Stone Unapologetic IPA.Yes, another IPA. And with biscuit malts to help the brand new hop varieties shine, it was quite special. We also revisited Wil Wheaton and Drew Curtis’ partially bourbon barrel-aged, wheat-and-rye-infused, 13.5% ABV imperial stout from 2013, adding a new element in the process. Aisha Tyler jumped on board in place of Stone CEO Greg Koch to brew Stone w00tstout 2.0, which also included stone-ground chocolate, making for an improvement on an already good thing. Continuing along the stout vein, Chris Banker, winner of our annual AHA homebrewing competition, was able to make his Mexican mocha stout recipe on our gargantuan brew system. Tijuana’s Cerveceria Insurgente also joined us in brewing Chris Banker/Stone/Insurgente Xocoveza Mocha Stout. With chocolate, cinnamon, nutmeg, chile peppers and coffee, this beery take on Mexican hot chocolate quickly became a favorite among Stone fans.

The massive amounts of new beer leaving our doors did mean that we had to cut back here and there. Our Quingenti Millitire series of barrel-aged beers, while just as interesting, was focused on smaller batches this year so that we could brew larger quantities of other beers for more people to enjoy across the country. Beers like those from our newly founded Stone Stochasticity Project. Our exploration of the science of beer has yielded some interesting, and tasty results. Stochasticity Project Grapefruit Slam IPA kicked the program off in January. Some may remember it as the popular and much-requested Stone Ruination IPA – Grapefruit Slam Edition. Other “experiments” included a Belgian-style quadrupel called Stochasticity Project Quadrotriticale, which was brewed with a rarely seen grain, triticale, and Stochasticity Project Hibiscusicity, which utilized hibiscus and orange peel to introduce a refreshing take on a Belgian golden strong ale. The most curious of these creations, however, was our recently released Stochasticity Project Master of Disguise. This golden stout has confused many with its light-hued appearance, but while the novelty might wear off, its lovely, roasty flavor is enduring. 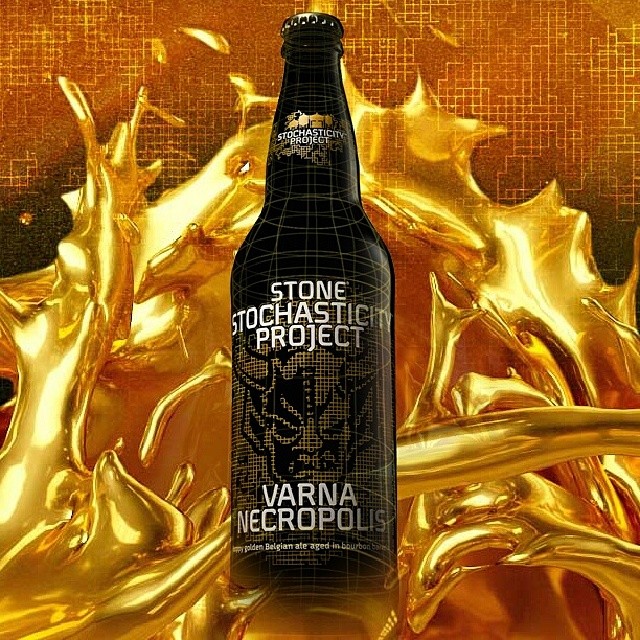 One hundred and twenty beers in one year is impressive, and much credit is due to Stone Brewing World Bistro & Gardens – Liberty Station for 45 of those (and counting)! They’ve brewed up one of the most diverse beer portfolios around. From Berliner Weisse to black barley wines and just about every style in between, Liberty Station has blown everyone away, ourselves included, however, the crowning achievement of the year goes to Liberty Station Brewing Director Kris Ketcham and his black witbier, Witty Moron for winning a gold medal at the Great American Beer Festival! Kudos, Ketcham. Kudos. 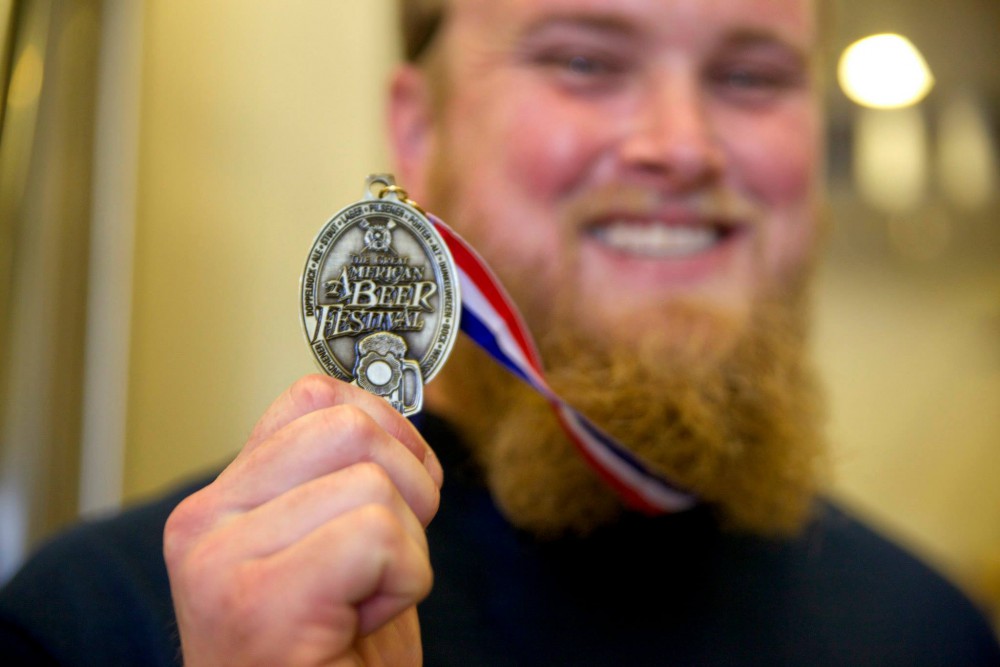 If this seems like a lot of beer to brew in a year, take a look at all the beers we didn’t even mention. One of which was the most unexpected and meaningful beer brewed this year, Rising Phoenix Pale Ale. The May fires that raged across North County San Diego destroyed a number of homes and almost took our brewery with them. We held an event to release this beer and thank first-responders and firefighters for the work they did for hours on end to protect us. The community pulled together to rebuild, and in that spirit we were able to generate $25,000 in donations through sales at the Stone Company Store Escondido and Rising Phoenix for a fund by the San Diego County Council of Firefighters. 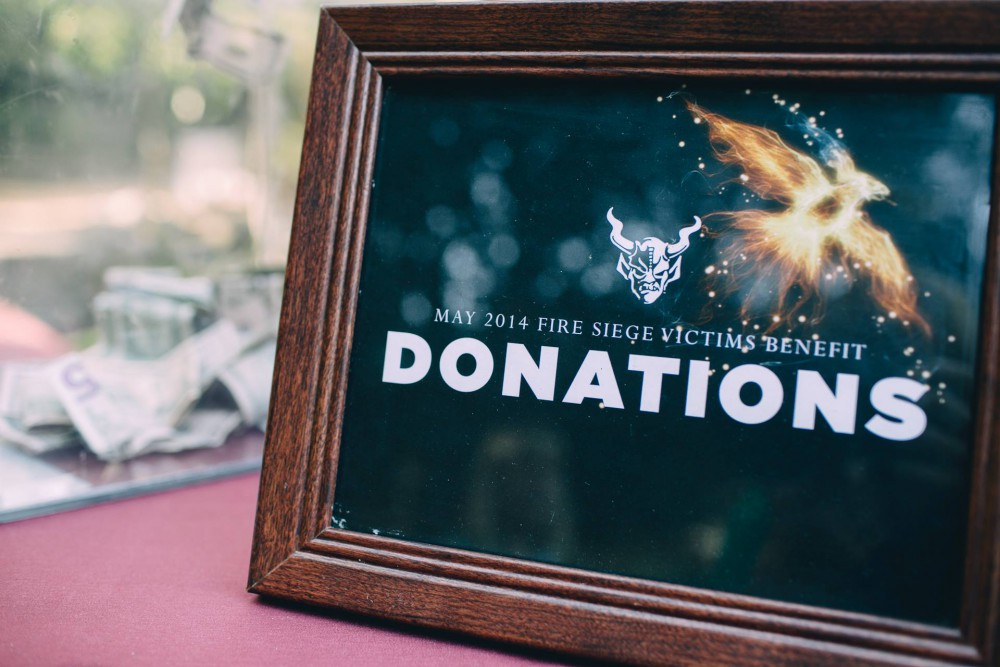 While these beers are great on their own, half the fun of making them is putting on festivals to show them off. We started off with Stone Oakquinox, a veritable feast of barrel-aged brews from around the world. Stone Sour Fest followed in June, with plenty of our mouth-puckering favorites. Hop Con 2.0 celebrated Stone w00tstout 2.0 and featured beers brewed at Liberty Station from Wil, Drew, Aisha and some of their beer-loving compatriots. We closed out the year with the darkest event in our repertoire, Stone Pour It Black. Over a hundred of the duskiest brews from around the world gathered in October, with almost all of the styles represented. But our favorite festival of the year, the Stone 18th Anniversary Celebration & Invitational Beer Festival, topped them all. Over 100 beers and thousands of people translated to $270,000 in donations for charities, which tipped us well over $400,000 for the year.  Boys & Girls Club of San Marcos, Fight ALD, Palomar Family YMCA, Surfrider Foundation and the California State University San Marcos Foundation were a few recipients of those funds. 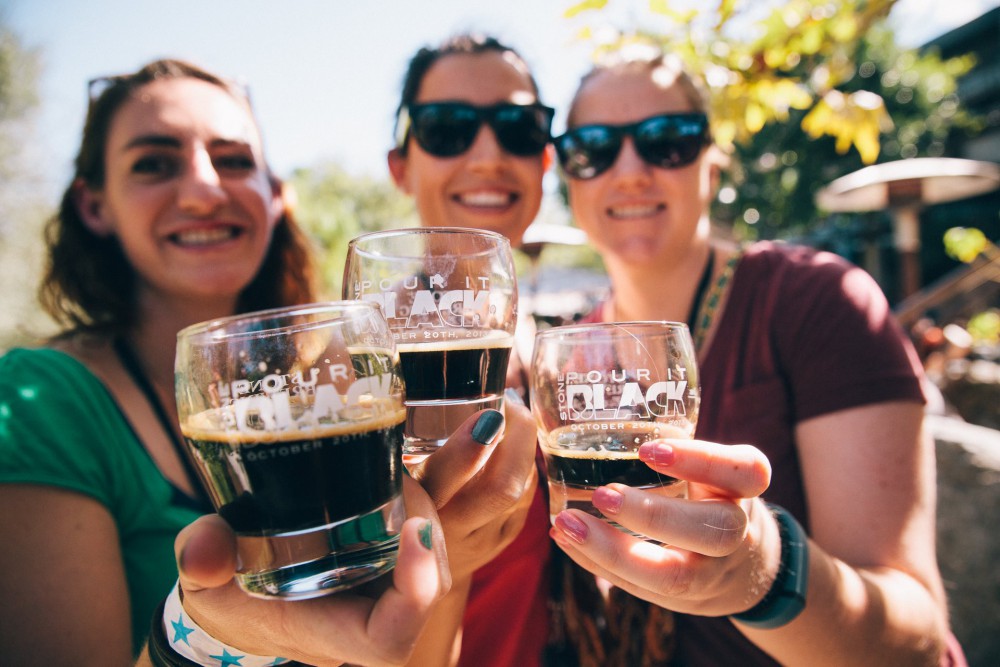 While that list of beer and events would make for an impressive year, we’re not done yet. Some big happenings (besides GK’s sabbatical) included the announcement of Stone Brewing Co. - Berlin. Stone will soon be the first American-owned craft brewer to build a brewery (and restaurant and packaging hall) in Europe. We’re excited for the opportunity to bring fresh beer (and our beer at that) to Europeans. Also exciting are the collaboration beers we plan on brewing once we’re operational in Germany. Our friends at BrewDog, Baladin, Avery Brewing, The Lost Abbey, AleSmith Brewing Co., Surly Brewing Co. and more will bring their A-game to brew the best beer that our (patient) fans helped bring to life via the Stone Groundbreaking Collaborations series. Not long after we made the announcement for Berlin, proposal for sites to house our East Coast location piled in. With hundreds of proposals, choosing top contenders was daunting, but eventually the top three emerged. That meant choosing between Columbus, Norfolk and Richmond, which was no easy task. After a difficult decision-making process, much deliberation and some admitted back-and-forth, a riverfront site in Richmond’s Greater Fulton Community was selected. We owe a ton of thanks to everyone who pitched in and helped us make both of these locations a reality. Both projects give us big reasons to be excited for the New Year. We look forward to embarking on 2015, a fresh slate for new beers and much, much more! 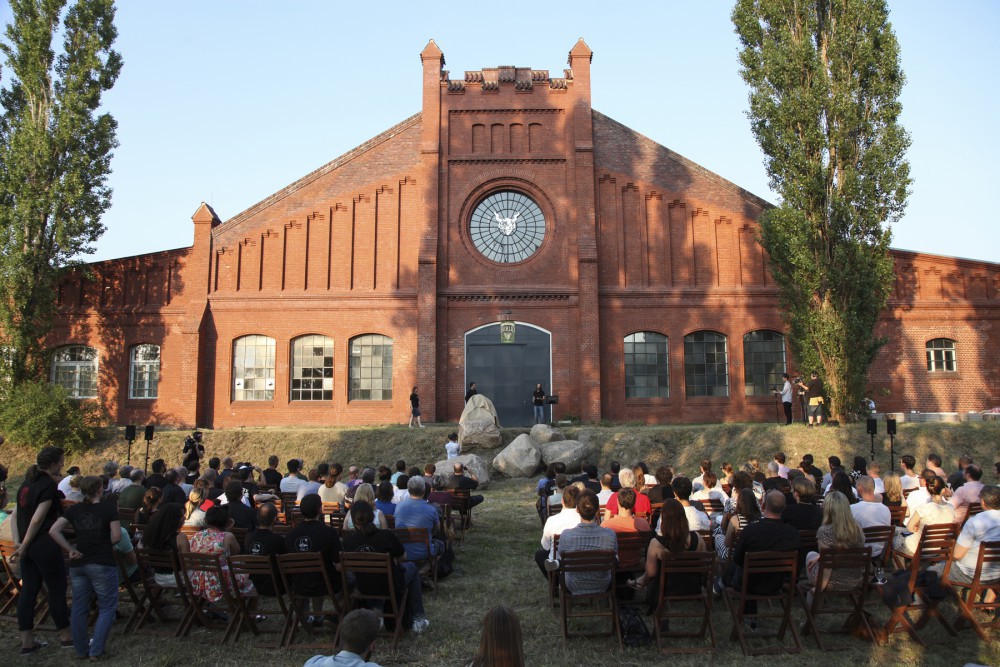